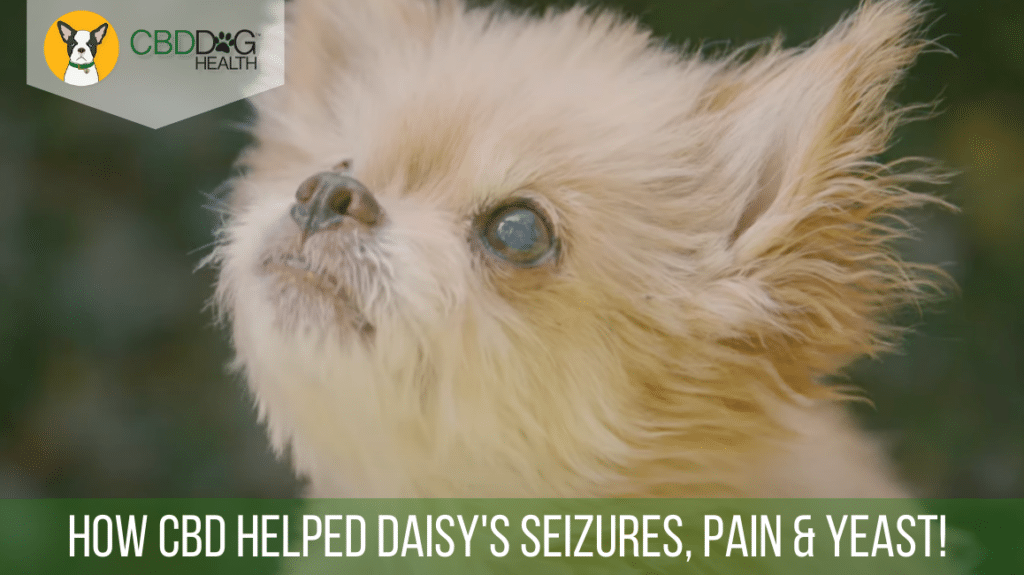 When Daisy joined us on my rescue farm, Fire Flake Farm, she couldn’t walk due to arthritis pain, was having up to 3 grand mal seizures a day, and had no hair left on her feet, covered in yeast. Here’s how CBD helped Daisy, and can also help your pet.

Along with Daisy, came many prescription drugs. First things first, we safely weaned her off of Phenobarbital and other medications. Next, we put her on a natural CBD regimen and switched her to a fresh and species appropriate, raw diet. Within two weeks, Daisy’s feet were no longer red or inflamed and her sores were gone. She also experienced a reduction in the number and duration of her seizures within the first week. Within a month, Daisy was seizure-free and no longer taking any of the prescription medications she had previously been prescribed.

CBD for Joint Pain and Arthritis 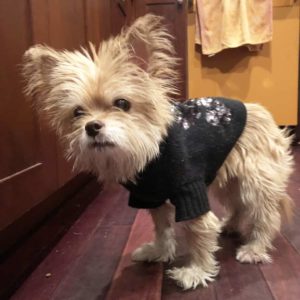 Full spectrum hemp extract (CBD) offers a wide variety of health-boosting benefits, with specific applications to help ease arthritis and the associated pain and mobility issues it can cause. CBD and the other compounds found in a full spectrum hemp extract are shown to reduce inflammation through the body. In many cases, the pain that our arthritic dogs feel is a direct result of the inflammation in their joints. When we soothe that inflammation, we are addressing the cause of the problem and also relieves the pain.

Cannabis has also been used as an effective analgesic dating back thousands of years. One of the ways it does this is actually by changing the way their central nervous system communicates the sensation of pain to our brains. Not only does CBD help manage pain on a naturopathic level, but it also stops the physical conditions that cause pain, inflammation.

We designed our EASE tincture, a full-spectrum CBD oil for pain in dogs, as a natural anti inflammatory for dogs, formulated with frankincense and turmeric, to target inflammation, balance the immune system and soothe your dog’s aches and pains. Our CBD helped Daisy’s arthritis and joint pain, giving her more mobility and allowing her to live pain-free.

In recent years we have had the incredible opportunity to learn from world-class studies by reputable scientific institutes who confirm what anecdotal evidence has pointed to for years. One of the most promising OA studies was conducted by the Baylor College of Medicine. Like previous studies, they found significant improvements in dogs with Osteoarthritis, who received consistent doses of full-spectrum hemp extract.

RELATED: CBD for Dogs with Arthritis and Joint Pain

One of the most commonly prescribed antiepileptic drugs used by veterinarians today is Phenobarbital. Despite its widespread use, the side effects of phenobarbital are potentially devastating for pets. While it is relatively effective at keeping seizures at bay, PB is known to dramatically affect our pet’s quality of life by simultaneously putting significant strain on their liver.

As an alternative, CBD from a full spectrum hemp extract has powerful anti-epileptic properties. CBD has been used by humans to manage seizures for years, and has shown great success in both animals and people. In fact, in 2003, the U.S. government patented CBD as a neuroprotectant (despite the U.S. prohibition on cannabis). Research shows it is an effective way to reduce seizures in dogs while avoiding the numerous negative side effects associated with pharmaceutical drugs like Phenobarbital.

CBD helped Daisy with her seizures, she was given 1 mL of HEAL 1100 mg Full Spectrum Hemp Extract twice daily (in the morning and the evening) and within a month, was seizure free.

Because of the rise of hemp-derived CBD for pets, studies focusing on the effects of CBD on seizures in dogs is being studied now more than ever. Neurologist Stephanie McGrath assessed the short-term effect of CBD on seizure frequency in 16 dogs. Dogs in the trial were randomly assigned a placebo or a hemp-derived CBD treatment for 12 weeks. Nine dogs received CBD while seven were given a placebo. All of the dogs in the study suffered from seizures. Through the study, McGrath found that 89 percent of dogs who received CBD in the clinical trial had a reduction in the frequency of seizures. Additionally, McGrath saw a significant association between the degree of seizure reduction and the amount of CBD concentration in the dog’s blood. 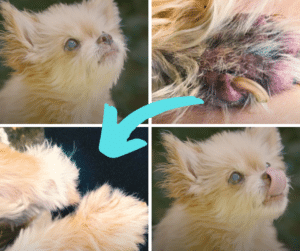 Yeast is extremely common in dogs and, most often, appears in the form of yeast dermatitis. Yeast dermatitis is caused by a fungus scientifically known as Malassezia pachydermatis. It’s not abnormal for yeast to be found on the skin of our dogs. It’s when there’s an overgrowth of yeast that causes concern. If there is a significant rise in yeast on or within the layers of the skin, a yeast infection will occur.

There are a few pharmaceutical options for yeast, but CBD is also an up-and-coming, and promising, option for antifungal use. Research has determined CBD has potential as a potent antifungal. A study published by the British Journal of Pharmacology, indicated cannabinoids like CBD, CBG, and CBC (found in full-spectrum products) can boost caryophyllene oxide.

Our REMEDY Full Spectrum CBD salve for dogs, is a great natural remedy for fungal infections, yeast infections, skin infections, polyps, warts, and other growths. CBD helped Daisy with her yeast issues, with Remedy, and a switch to an all natural diet, Daisy’s feet were no longer red or inflamed and her sores were gone within two weeks.