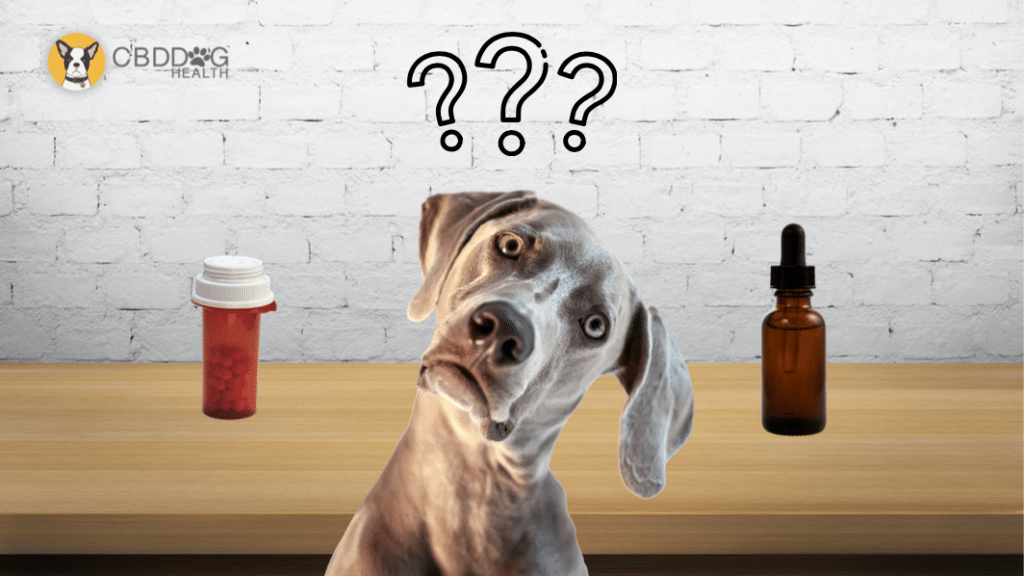 When it comes to controlling seizures in animals, there are many different options for pet parents to consider. One of the most commonly prescribed antiepileptic drugs used by veterinarians today is Phenobarbital.

Despite its widespread use, the side effects of phenobarbital are potentially devastating for pets. While it is relatively effective at keeping seizures at bay, PB is known to dramatically affect our pet’s quality of life by simultaneously putting significant strain on their liver.

As an alternative, CBD from a full spectrum hemp extract has powerful anti-epileptic properties. Research shows it is an effective way to control seizures in dogs while avoiding the numerous negative side effects associated with pharmaceutical drugs like Phenobarbital.

What is Phenobarbital for Dogs?

Phenobarbital is part of the family of drugs called barbiturates, and can be found under various brand names such as Lumina, Solfoton and Tendral.

It was first synthesized for human use waaaaay back in 1911.

It is one of the oldest synthetic drugs still in wide use today. Initially, it was formulated as a hypnotic and sedative, but in February 1912, a young clinical assistant discovered it’s antiepileptic properties and the rest is history…

Since then, it has been widely used for humans and pets alike as an anti-epileptic, but not without its own set of side effects and risks.

How is it administered?

In most cases, phenobarbital for dogs is administered orally, once or twice a day. It comes in both tablet and liquid form, as well as intravenously at veterinary offices.

Various dosages are given based on a dog’s weight and the severity of seizures, among other factors, as sensitivity to this drug ranges quite a bit.

How does it work?

Phenobarbital works by suppressing electrical impulses within your pet’s brain and depressing the central nervous system. Think of it like turning down the volume on your car radio. Less energy through the system means less peaks on the high end.

‘Barbiturates’ like PB are metabolized primarily by the liver and secreted by the kidneys making them potentially problematic when combined with other drugs.

According to Dr. Zac Philossoph, phenobarbital takes a couple of weeks to reach stable blood concentration levels and may not be effective immediately. Consistency is especially important with this drug, as missed doses can result in a recurrence of seizures.

Depending on the case, there are varying degrees of effectiveness with this drug. It does not necessarily stop seizures altogether, in fact, Dr. Carla Johnson reports that in most cases it only reduces seizures frequency by 50%.

Seizures are caused by an excess of electrical energy in your dog or cat’s brain. CBD Dog Health’s chief veterinary officer, Dr. Zac Philossoph uses the analogy of seizures as a ‘brain sneeze’. That sounds cute, but seizures can be very scary.

When neurons begin misfiring and overactivating, it can cause all the hallmarks of a seizure.

Dog seizures happen for a range of reasons. Some occur because of structural damage to the brain, some because of interactions with elements in our dogs’ environment.  In addition, some breeds are just more prone to seizures than others.

Classification of seizures is done a couple of ways.  First, seizures are classified with regard to the underlying cause of the seizure.

The first thing veterinarians will define is the catalyst for epileptic events. This is meant to define the origin of the episodes whether it be internal or external forces.

In many cases seizures are caused a combination of underlying conditions and external factors:

According to the International Veterinary Epilepsy Task Force, there are three main types of seizures in animals:

This class of seizure is often known as a Gand Mal seizure. They involve both cerebral hemispheres, and usually result in a  loss of consciousness.

Similar to generalized seizures, but does not usually result in unconsciousness. These seizures are typically caused by stimuli like light or sound. They can also be a result of underlying structural damage in the brain.

Focal seizures usually do not result in unconsciousness. They typically only affect one hemisphere in the brain and present as subtle changes in behavior, like twitching, absent-minded chewing or loss of balance. Focal seizures often precede more serious degenerative patterns that cause more generalized seizure activity.

According to Dr. Michelle Carnes,  “Our [epileptic] patients may experience focal seizures prior to developing generalized seizures; they just probably go unnoticed,”

An Alternative to Phenobarbital…

CBD from a full-spectrum hemp extract!

Since hemp became federally legal in 2018, a lot of research has been done to explore the efficacy of CBD as a treatment for epilepsy. Aside from thousands of anecdotal cases where seizures were treated with cannabis, we now have clinical research that confirms those findings.

In a 2017 double-blind study conducted by Colorado State University, 89% of dogs who received CBD in the clinical trial had a reduction in the frequency of seizures. Additionally, they saw a significant association between the degree of seizure reduction and the amount of CBD concentration in the dog’s blood.

This was not the only study to find CBD to be a successful anti-epileptic supplement for pets. Yamazaki University of Animal Health Technology in Japan conducted a similar experiment with great results.

In addition to these clinical trials, holistic pet cannabis expert, Angela Ardolino has treated hundreds of animals on her rescue, Fire Flake Farm.

In a recent interview, she talked about one of her rescue’s journey.

“We had an 18-year-old Chihuahua who had been experiencing multiple grand mal seizures a day, but 100 mg of the HEAL full spectrum hemp extract tincture from CBD DOG Health every day kept them at bay. Along with reducing her dementia, increasing her energy, focus and appetite”.

Daisie was fed a well rounded raw and fresh diet as well as getting daily applications of Soothe salve on her yeasty paws. With great pride Angela says,  “After a month, you would hardly recognize this dog!”

Side Effects of Phenobarbital

When our pets have seizures the first thing we are concerned about is their safety and comfort. The last thing we want to do is cause them more discomfort or put them in danger, but with drugs like PB that is often the unintended consequence of long-term use.

As we’ve discussed, the main way that phenobarbital works is by suppressing electrical energy in the brain. One of the clear results of this mechanism is it reduces the mental function of our pets. They are commonly reported to be tired, slow and almost depressed looking. Where quality of life is concerned, this is a big loss.

Pet parents commonly see their dogs gaining a lot of weight while taking phenobarbital. Not only does this affect their quality of life, but it can also cause a domino effect in other areas of their health and well-being.

Polyuria, or excessive urination is caused by the increased thirst drive in dogs who take PB. When your dog or cat is taking this drug, it is not uncommon to find messes around the house.

Especially in the beginning, many dogs who are treated with Phenobarbital experience vomiting and an upset stomach. Typically this diminishes after a couple weeks of treatment.

Phenobarbital is not recommended for younger animals as clinical research indicates it has neurotoxic effects  and can be extremely detrimental to cognitive development. Suppression of brain function sounds bad for any animal, but it is especially detrimental to developing brains.

One of the most significant side effects that dogs experience when treated with Phenobarbital is stress, and eventual damage to the liver. In most cases, long term damage occurs after the three months mark. It can start with scarring of the liver and end with significant loss of liver function, depending on how closely they are monitored by your veterinarian.

In the majority of dogs, a serum PB concentration between 25−30 mg/l is required for optimal seizure control. Serum concentrations of more than 35 mg/l are associated with an increased risk of hepatotoxicity and should be avoided.

Phenobarbital has been linked to raised levels of several liver enzymes that are used as markers to indicate liver damage (ALP, ALT, GGT). The significant anomalies in these levels indicate that the liver is working overtime to process the drug.

Side Effects of CBD for Dog Seizures

CBD is known for its high level of efficacy with seizure control as much as it is for the safety of its use. There is a significant amount of research that points to the safety of CBD as a way to help our pets, even at extremely high doses well above the normal recommended levels.

Many critics of CBD will point to one study which suggests that the use of CBD can lead to a rise in one particular liver enzyme, APL. According to experts in the veterinary field like Dr. Gary Richter DVM, this is not a significant rise and should be looked at as insignificant.

It is worth mentioning that there are multiple other studies which do not show any increase in liver enzymes like ALP for dogs treated with CBD from a full-spectrum hemp extract.

What we do know is that the minimal rise in liver enzymes from CBD is nothing compared to the significant levels seen in dogs treated with phenobarbital. CBD is not known to cause liver damage, but it is processed by the liver.

Phenobarbital Interactions With Other Drugs

Along with the numerous side effects and potential damage to the liver, Phenobarbital can have dangerous interactions with a long list of drugs. If you are using Phenobarbital for your dog, consider the limitations associated with its relationship to other treatments.

Avoid phenobarbital in combination with these drugs.

CBD Interaction with Other Drugs

Though CBD’s interaction with other drugs still requires more clinical review, it is widely believed to be incredibly safe and stable with most commonly prescribed pharmaceuticals.

That being said, CBD is just one part of many in a complex relationship between compounds interacting in a full-spectrum hemp extract. Depending on the drug, it is possible that CBD may increase or decrease potency of another drug, or have no effect at all.  It is always a good idea to consult with your holistic vet to find out how CBD may interact with drugs your pet is already taking.

For more information about drug interactions with CBD, check out this article!

When given the choice between Phenobarbital and CBD for the treatment of seizures, the most important thing to consider is quality of life. Our goal in the first place when trying to reduce seizure intensity and frequency is to make our dogs feel better.

The issue with so many of these conventional pharmaceutical drugs is you replace one problem with a whole set of others that can end up being even more detrimental than the ones you started with.

Though the effects may not be immediately as effective with a holistic approach, you can be confident that the effects will be better tolerated and more supportive of your pet’s wellness and longevity.