IN THE PRESS: Days of our Lives Star Shares How He Saved His Dog’s Life 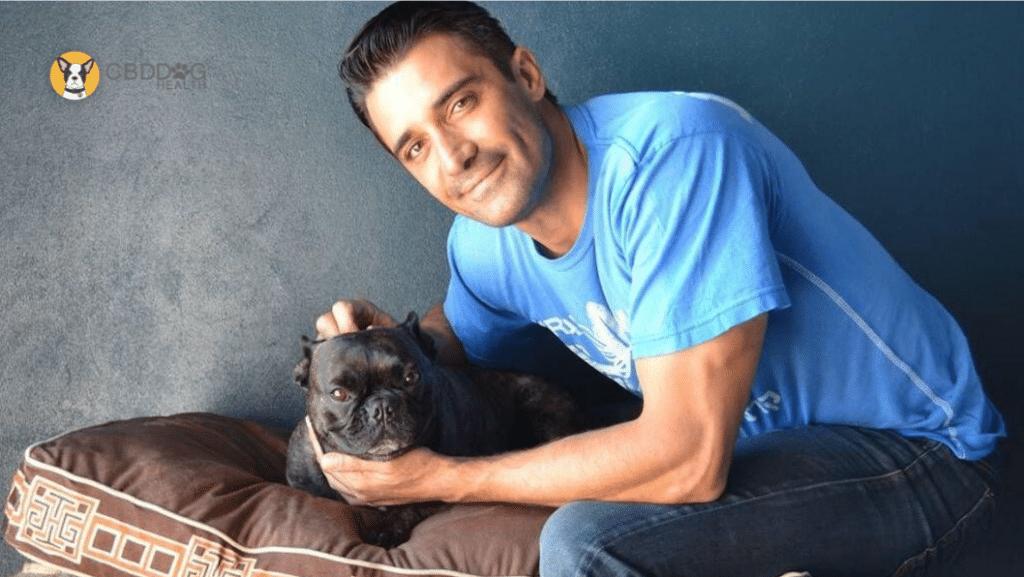 This article was originally published on Soaps.com

With National CBD Day fast approaching — it’s Saturday, Aug. 8 — Days of our Lives alum Gilles Marini has come forward to share with Soaps.com the tail… sorry, tale… of how cannabidiol not only saved the life of his beloved French bulldog, Mila, it gave her a whole new lease on life. Brace yourselves before continuing, though; the ride that Ted Laurent’s former portrayer takes us on is one of the roller-coaster variety!

Gilles Marini: Four years ago, the doctors told us to say goodbye to her because she has an inoperable cyst inside her spinal cord. Even though they told us she probably wouldn’t survive the disc surgery to alleviate her pain, she was a fighter and made it through. Afterwards, the vet said that the cyst will just keep growing, and there’s absolutely nothing we could do because it will eventually push her nerves. They warned us that once she began to drag her legs and have difficulty walking, it would also affect her bowels and she would poison herself — much like someone on dialysis.

Soaps.com: How quickly did that come to pass?

Marini: In the early stages, she’d still be able to play with her front legs, but it continued to develop and she lost much of the use of her back legs.

Soaps.com: You must have been a wreck.

Marini: Around the end of last December, we came to the point where she couldn’t walk anymore and my family decided it was nearing the time to put her down because we didn’t want her to be in pain. She had been on anti-inflammatory pills, but they had stopped working. We were heartbroken, and had started making arrangements with the vet. In early January, my wife Carole was with Mila when I met Angela Ardolino, a holistic pet expert, at the Golden Globes. That’s when everything changed — she introduced me to full-spectrum CBD and sent me home with tinctures for Mila. Within 15 minutes of giving Mila the full-spectrum CBD, she is upstairs!!! Mila hadn’t been able to go upstairs in three years because she couldn’t use her back legs on the stairs.

Soaps.com: When you first discovered CBD, were you like, “Oh, thank God!” or was there a part of you that didn’t want to get your hopes up?

Marini: When I was traveling home after the Golden Globes, I was thinking in my mind that the tinctures probably aren’t going to work. But honestly, I would have tried anything at that point. Of course we had used other types of CBD oils before for Mila, but nothing ever made a difference until I started using Angela’s full-spectrum HEAL formula.

Read the rest of Gillies story on Soaps.com >>