Helping Laminitis in Horses with CBD 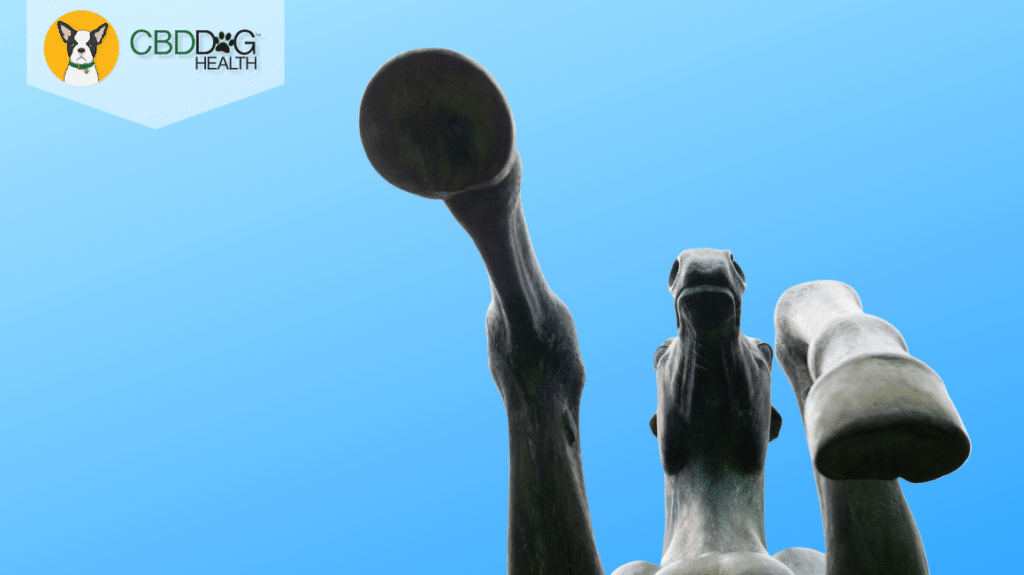 Laminitis, or inflammation in the lamina of the hoof, is a common foot problem affecting many horses and other animals in the horse family including ponies, donkeys, and mules. Laminitis involves the breakdown of the bond between the hoof’s wall and the pedal bone. The pedal bone is similar to the bone at the top of our middle finger. Similar to how our fingernails are attached to our fingers, the hoof wall is attached to the pedal bone.

The bond in the hoof wall is the only factor preventing a horse’s full weight from going through the horse’s sole. There is extensive blood supply within this bond making it susceptible to many systemic conditions contributing to the development of laminitis in horses.

There are multiple potential causes of laminitis in horses. The main factors often involve overload of grain, ingestion of lush grass, colic, diarrhea, sepsis, and/or overweight bearing. For example, if the horse steps on a sharp object with one foot and is unable to bear weight on that particular hoof, the other forelimb is at risk for developing laminitis as it is bearing the majority of the horse’s weight.

Other factors that are known to contribute to laminitis development include:

Signs of Laminitis in Horses

The signs and symptoms associated with laminitis depend upon the severity of the condition. Sometimes, laminitis may only last a few hours or days whereas, in other cases, laminitis could become chronic. The most common sign is lameness ranging from fatigue to complete inability to bear weight. If the horse is able to bear weight, he or she may have an altered gait.

Laminitis most frequently occurs in the forelimbs, although it can occur in any of the four hooves. Laminitis is also known to be extremely painful due to the abundance of nerve endings in the hoof.

To begin, laminitis is generally diagnosed via lameness. Changes, like the thickening of the hoof wall and pedal bone (also known as the coffin bone), are also noted. Contrast venography may also be utilized to take a closer look at the blood vessels within the affected hoof. Contrast venography allows the veterinarian to take a look at the areas where there is little to no blood flow and determine the severity of laminitis.

According to Dr. Diane Wagner, DVM, it’s also important to take a look at the way horses walk, especially on turns. A horse with laminitis may have a heel first landing and/or rock back on the hindquarters with his front feet out in front of him. The hooves are also generally warm and the digital pulses are increased. Dr. Wagner continued to state there could be an underlying cause for laminitis, like Cushing’s Syndrome (use bloodwork to diagnose), a virus (would have a fever and lack of appetite), Strangles caused by Streptococcus equi, and/or a steroid overdose from multiple joint injections.

Laminitis is one of the most studied conditions found in horses. Despite extensive research, laminitis is not fully understood. Prevention and treatment of laminitis is particularly challenging.

It’s critical to treat the laminitis as soon as symptoms are noticed. The earlier the laminitis is found, the better the prognosis. If a horse has been in the grain bag, shows any signs of colic or lameness, or is showing any inability to bear weight on a hoof, that’s when it’s time to call the veterinarian to determine the underlying cause.

Cryotherapy is one of the most effective methods found in treating laminitis thus far. Essentially, the horse will stand in ice boots to protect the foot and prevent further damage from occurring. Cryotherapy has been shown to be successful to treat laminitis effectively when performed by an experienced veterinarian. During cryotherapy, it’s critical the horse be monitored to ensure cryotherapy is working properly.

Once a horse has been diagnosed with laminitis, even once she returns to being physically stable, she will require special care for the remainder of her life depending on the severity of the condition when it was diagnosed. The following actions may be recommended by your veterinarian:

Your veterinarian may also request routine veterinary visits to re-check the affected hoof. Generally, this is every 3-4 months. When caught early, there are some horses that may be able to go back to their relatively normal state. In most cases, the main focus is placed on prevention of further wear.

CBD may be considered as an alternative option to alleviate not only the inflammation, but also the pain associated with the condition, naturally. CBD may also bring the body back to balance (AKA homeostasis) resulting in a higher quality of life for your horse.

CBD has been found to effectively, and safely, reduce many of the same symptoms as traditional medications like NSAIDs and steroids do without the same adverse effects. CBD can become part of a long-term, effective, therapeutic health plan for laminitis in horses.

If you were to look through CBD studies, you will notice there is a lack of research on horses. It’s critical to note all mammals possess an endocannabinoid system that is positively influenced by cannabinoids, like CBD. This means the research on people, cats, dogs, and other mammals can be utilized by scientists, and by us, to determine the effects on certain ailments including pain, inflammation, and anxiety among other conditions.

Additional research that was also recently released was conducted by the Baylor College of Medicine. In this study, researchers found significant improvements in dogs who received consistent doses of full-spectrum hemp extract. The study noted dogs who utilized full-spectrum hemp extract experienced a higher quality of life when examined by both their pet parent and their veterinarian. The same can be inferred for horses; if this works for dogs, horses (who possess the same endocannabinoid system) may experience similar relief.

Then, a study published in 2006 in Current Neuropharmacology, found that CBD has therapeutic benefits for both people and pets suffering from chronic pain and acute chronic pain episodes.

Nutrition for Horses with Laminitis

According to the Royal Veterinary College, horses with laminitis should be fed 1.5% of his or her body weight in hay. Your veterinarian may suggest the hay be soaked to remove as much of the carbohydrate content as possible. Hay is preferable over haylage; haylage is more palatable which means the horse may eat more resulting in an increase in insulin. To reduce hay ration, your veterinarian may also suggest fiber-based products containing chaff or unmolassed sugar beet.

The key with laminitis is to focus on prevention. Of course, you cannot control all the potential causes, but preventing the causes which are in your control are critical to your horse’s health. Ensure all grain is stored securely out of your horse’s reach and introduce your horse to lush pasture gradually. If your horse becomes ill, stressed, or overweight, he or she is at particular risk for developing laminitis. You should also discuss a nutrition plan with your veterinarian, schedule routine check-ups, and appropriate hoof care. If you suspect laminitis is beginning, contact your veterinarian to schedule an appointment as soon as possible.