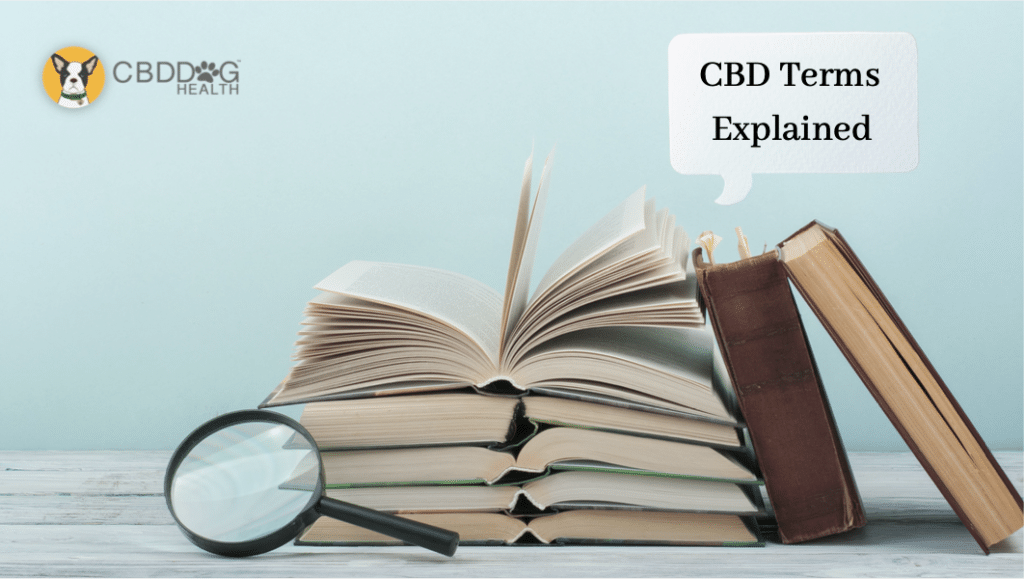 Every mammal’s body contains an intricate system which has been found to interact synergistically with the compounds found in the cannabis plant. This system, discovered in the 1990’s is known as the Endocannabinoid System, or ECS. We are still learning about the ECS but so far we do know it affects nearly every function in the body including movement, reactions, and how you (or your dog, cat, or other mammal) feels.

Since the discovery of the ECS, researchers have found the system is responsible for bringing the body back into balance. For a full review of the Endocannabinoid system, click here.

We know the ECS, the terms involved with Cannabis, and Cannabidiol can become overwhelming to learn. That’s why we have developed a glossary of sorts here for you to return to when you’re learning about cannabis.

2-AG is a signaling chemica present at high levels in the central nervous system and has been identified within breastmilk in humans. 2-Arachidonoylglycerol (2-AG) was the second endocannabinoid to be identified when it was isolated from within a rat’s brain and the gut of a canine.

AEA is known as the ‘bliss’ or ‘joy’ molecule. Anandamide is structurally very similar to the cannabinoid,  9-Tetrahydrocannabinol (THC). This compound is particularly important because it was the first endocannabinoid to be discovered from the pig brain by William Devane and his team of researchers in 1992.

Bioavailability refers to the amount of time, and at what rate, something is absorbed into your bloodstream and how much is excreted without effect. This is important because bioavailability effects how much to give in one dose, and how quickly your pet can feel the effects.

Broad-spectrum is a term used to refer to extracts in which one or more compounds, such as THC have been removed from a whole plant extract.This process can negate the entourage effect. You might see this more with CBD from marijuana plants with higher than .3 percent THC, rather than CBD from hemp oil.

Cannabidiol, or CBD, has been proven to be helpful with anxiety, pain, and inflammation, among numerous other conditions.

The most prevalent group of naturally occurring, biologically active chemical compounds of hemp or cannabis (THC and CBD are the most common). The Cannabis plant contains more than 100 different cannabinoids.

Cannabinoid receptors (in the ECS) found on cell surfaces in the human body. CB1 receptors are commonly concentrated in the brain and central nervous system.

Cannabinoid receptors (in the ECS) are found on cell surfaces in the human body, but most commonly concentrated in the peripheral organs. CB2 receptors are particularly associated with the immune system.

CBD isolate is Cannabidiol that’s pulled from the plant and devoid of all other components of Cannabis. Unlike full-spectrum CBD, the isolate does not contain any other cannabinoids, or terpenes.

A certificate of analysis should be provided to verify the CBD product contains what it says on the label and is free of dangerous contaminants. The COA should present exact measurements of cannabinoids and terpenes and prove undetectable levels of heavy metals, solvents and pathogens.The COA should not be conducted by the company selling CBD products, but should rather be available from a third party without bias.

The entourage effect is the theory that all compounds in the Cannabis plant work together synergistically, and are most efficient with optimal effect on the body when the whole plant is considered rather than an isolate.

Enzymes (as they relate to CBD)

Enzymes are used to help the body create endocannabinoids. And, are also responsible for breaking down endocannabinoids once they are done being used. 2-AG and Anandamide, for example, are both degraded by enzymes in the body.

Cannabinoids that are not made by the human body naturally (example: THC). They mimic our naturally synthesized cannabinoids and are similar in chemical structure, but use a different pathway (receptors) to relay information to produce physiological effects.

CBD oil can be extracted from both the marijuana and hemp plants, which both are in the cannabis plant family. Our hemp oil is extracted from the flower of the hemp plant, and it has a full spectrum of cannabinoids (natural compounds and terpenes). CBD from hemp plants are extremely high in CBD and extremely low in THC. For this reason, your pet gets all the benefits without having the psychoactive effects of THC.

The chemical compounds in cannabis plants that mimic the naturally-occurring endocannabinoids. Examples include CBD and THC; there are over 100 phytocannabinoids found in Cannabis.

The easy way to remember the difference between salves and balms is that balms feel more firm, like chapstick or lip balm. Balms are made to create a barrier against elements, like chapped lips or burns. They often do not penetrate as deeply because they tend to be more oil-based and thick. Salves are less firm than balms, but more firm than lotions, making them a better choice to deeply penetrate the layers of the skin without feeling greasy. Salves can contain a variety of ingredients, like essential oils, CBD hemp oil, shea butter, coconut oil, etc. Salves are often a better way to treat skin that has been damaged, dry, or is suffering from allergies. Lotions are more water-based and often are not absorbed by the skin as easily. For dogs, salves are the best method to treat and prevent skin irritations.

The aromatic compounds of the essential oils from the Cannabis plant. Over 100 terpenes have been found in Cannabis. The effects of terpenes from Cannabis may be amplified in the presence of other compounds (The Entourage Effect).

THC is the most well-known cannabinoid found in Cannabis due to the psychoactive (AKA ‘high’) that accompanies the cannabinoid. CBD is not permitted to contain over 0.3% THC which is not sufficient for a ‘high.’

When used in the context of CBD oil, our tinctures contain therapeutic properties to help relieve inflammation, reduce stress and anxiety, help with allergies, and combat illness.