What’s an Endocannabinoid System and Why’s it Important? 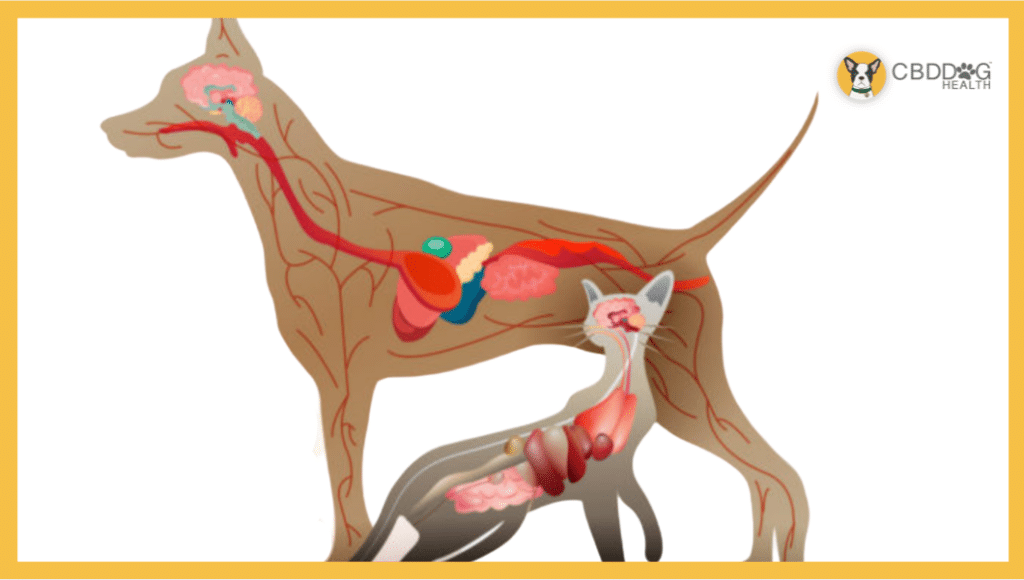 The endocannabinoid system, or ECS, is a cell-signaling system (you’ll hear a lot about receptors) that was found via research in the early 1990’s.

A study published by Pharmacol. Rev. explained the identification of cannabinoid receptors in the body has “triggered an exponential growth of studies exploring the endocannabinoid system and its regulatory functions in health and disease.” The study went on to state “in the past decade, the endocannabinoid system has been implicated in a growing number of physiological functions, both in the central and peripheral nervous systems and in peripheral organs.”

Researchers still have a long way to go, and a lot to learn, but what they have discovered thus far is remarkable.

What do we know?

We know now the ECS is responsible for a large range of processes in the body including (but not limited to): sleep, mood, memory, reproduction, and appetite. The Endocannabinoid System is also responsible for:

One of the main reasons so many areas of the body are affected by the ECS is due to its ability to increase communication within and between the body’s systems and restore something called homeostasis.

Homeostasis is a balance within your body. Basically, it means if your body strays away from it’s normal, it will be brought back. Homeostasis keeps everything in the body stable and working as effectively as possible. If your dog’s body temperature is too high, homeostasis will work hard to bring her body temperature back to normal. When you’re hungry, your stomach begins to make odd noises. It’s telling you it’s time to eat. Without food, you can become drowsy, get a stomach ache, etc. Those are consequences of not permitting your body to return to homeostasis. Once you eat, homeostasis is content and will continue business as usual.

How does the Endocannabinoid System work?

When talking about the ECS, you’ll hear a few terms on a regular basis. The terms will be endocannabinoids, receptors, and enzymes. These three components play critical roles in the ECS. 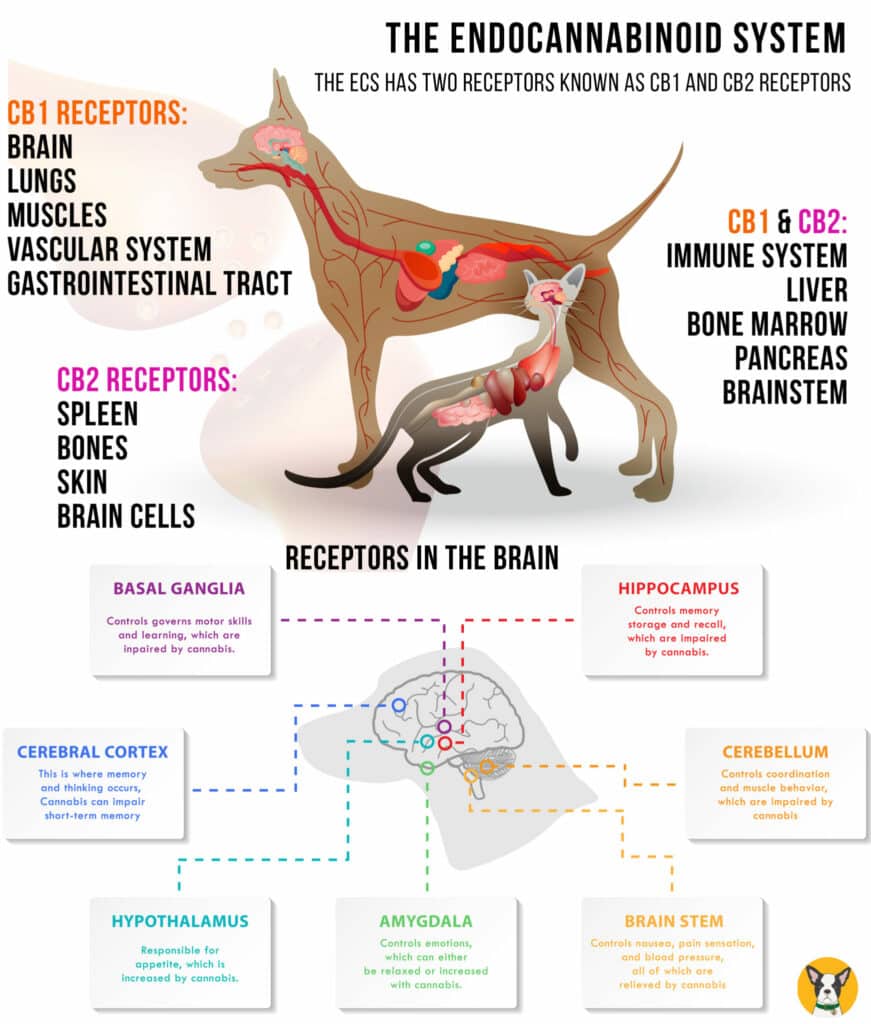 Cannabinoids are molecules produced by the body as well as plants in nature, which interact with the ECS. The body naturally produces ‘endocannabinoids’ that bind to cannabinoid receptors ‘waking up’ the systems within your dog. Similarly, exogenous cannabinoids produced by plants like the cannabis plant look to the body like it’s own native cannabinoids. Basically, nature has designed compounds that mimic chemicals already present in the body! How cool is that?!

There are two main endocannabinoids (endogenous cannabinoids) that are focused on in scientific studies; anandamide (N-aracidonoylethanolamine or AEA) and 2-AG (2-ArachidonoylGlycerol). Both of these endocannabinoids are produced on an as-needed basis.

Exogenous cannabinoids, like THC, are cannabinoids that are not made by the human body naturally. They mimic our naturally synthesized cannabinoids and are similar in chemical structure, but use a different pathway (receptors) to relay information to produce physiological effects.

There are receptors all throughout the body that interact with both endogenous and exogenous cannabinoids, like CBD. (yes, in your dog’s body and your own).Cannabinoids bind to receptors, a bit like a puzzle piece, to communicate what they would like to say. There are two main endocannabinoid receptors.

CB1 receptors, first found in 1988, are commonly found in the central nervous system. It’s not limited to the CNS, though. It has been found in other areas of the body,  but it’s concentrated in high numbers in the brain (neocortex, hippocampus, basal ganglia, amygdala, striatum, cerebellum, and hypothalamus).

Where are they found?

Since CB1 is found in high concentrations in major areas of the brain, research leads us to believe this receptor affects learning and memory, decision-making skills, motor responses, sensory processing, and emotional responses. Scientists remain unsure how to enhance the effects of the CB1 receptor, but have found conditions including chronic pain, anxiety, and wasting syndrome (chemo/AIDS-related in many cases) utilize the endocannabinoid system to their benefit by activating CB1.

You’ll hear of people using cannabis to ‘self-medicate’ to reduce their anxiety. This works because CB1 has been activated by the cannabis plant.

Where are they found?

CB2 receptors are often found in immune cells and other portions of the peripheral nervous system. In a study conducted by the Department of Veterinary Medical Sciences, University of Bologna, Bologna, Italy, dogs were found to have a substantial amount of receptors in their endocannabinoid system, specifically in the spine, which allows dogs to more effectively use CBD. Research has found dogs have more receptors than other mammals which is why they have particular sensitivity to CBD oil.

If you’re like most, you probably haven’t heard about enzymes since high school. That’s perfectly understandable, that’s what we are here for.

Enzymes are used to help the body create endocannabinoids. And, are also responsible for breaking down endocannabinoids once they are done being used. 2-AG and Anandamide, for example, are both degraded by enzymes in the body.

All three of the above conditions have commonalities:

Although these three have been the most researched in regard to endocannabinoid deficiency, others are being monitored due to the lack of endocannabinoids in patients. These conditions include:

Scientists are still researching how endocannabinoid deficiencies can be remedied. Research into CBD and other Cannabis applications will continue to be conducted.

Basically, endocannabinoids and the ECS system are responsible for keeping your pet’s body and it’s various systems in balance. (homeostasis). If there is something wrong or some type of imbalance in your pet’s body, the compounds found in a full spectrum hemp extract help trigger the right response which will allow the body to heal itself. Naturally.

The endocannabinoid system has great potential. When cannabinoids are introduced into the Endocannabinoid System, it helps bring balance to the bodies of pets with cancer, seizures, and inflammatory bowel disease, nausea, and pain. Exogenous cannabinoids, like THC and CBD, can also be used to inhibit side effects related to cancer treatments (radiotherapy, chemotherapy).

With more research being conducted every day, there are numerous advances in cannabis science being made in regard to how the endocannabinoid system can maximize its power. Due to its non-psychotropic characteristics, cannabidiol (CBD) has been a main focus. Aiming toward therapeutic applications is the goal to help as many people and animals as possible. It only goes up from here! 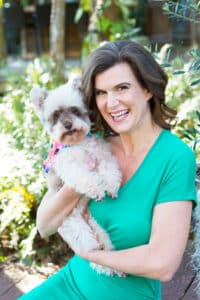