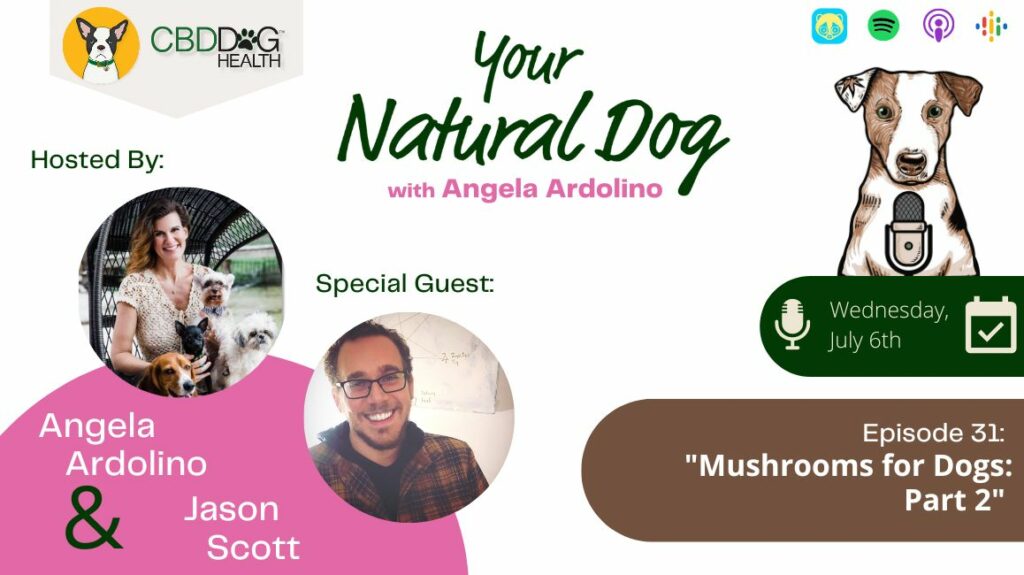 There’s so much more to talk about around medicinal mushrooms, so Jason Scott is returning to the podcast to answer more questions! Jason is a mycologist, ethnobotanist, and spagyricist who has spent the past decade studying traditional hermetic alchemy. In this episode, he breaks down the benefits of some of the most popular mushrooms — and a couple you’ve probably never heard of. Jason also discusses how to find the right dose for your pet, the difference between extraction methods, and so much more.

MycoDog tinctures are thoughtfully formulated, from mushrooms that are grown outside, naturally, with no grains or fillers. Mushrooms are bio-accumulators (absorb toxins from polluted air and environment), so we searched for mushrooms grown in their natural habitat, in the woods of the Pacific Northwest. It is important to source mushrooms from an area that is least likely to be impacted by environmental toxins which might be absorbed by the mushrooms.

MycoDog tinctures are also better preserved in organic glycerin, compared to mushroom extract powders, which can begin to oxidize the moment the package is opened. And here’s another benefit of tinctures—they are typically more bioavailable than powdered versions.

How Mushrooms Helped My Dogs

Clarity for Daisie and Potato

Clarity was designed to support your dog’s cognitive disorder, nervous system, mental and emotional health, formulated with a proprietary water extract of Lion’s Mane, Reishi and Cordyceps, with Bacopa Monnieri and Ashwagandha.

Odie, my senior mini-schnauzer, is turning 16 soon and I wanted to be able to support him as best as I can.

“I lost two of my dogs, Potato and Daisie, to dementia, to CCD, canine cognitive dysfunction, which is Alzheimer’s for dogs. So knowing Lion’s Mane and Reishi’s power, and what it can do for these geriatric dogs, I have literally watched Odie, my 15 year old dog, go from having no interest in eating.. to taking his mushrooms and eating like a monster the next day. I literally can see a difference in my dog’s behavior and health by giving them these mushrooms.” – Angie

“Breathe I also created for Odie because in his old age he suffers from collapsing trachea, a heart murmur, and CHF, according to his last integrative vet. I just see him getting old and needing extra cardiovascular and respiratory support.” – Angie

Breathe was designed to help your dog’s respiratory and cardiovascular systems, formulated with proprietary water extract of Cordyceps, Reishi, Artist Conk and Chaga, with Ashwagandha.

If you’ve been following me, you’ve heard about Nina, my doberman who is beating all odds against bone cancer.

Vitality was designed to help my Nina, making it the perfect holistic supplement for pets with Cancer, Autoimmune Disease, Liver issues and Respiratory issues. Vitality is formulated with a proprietary water extract of Turkey Tail, Reishi, Shiitake, Maitake, Chaga, Artist Conk and Red Belted Conk, with Astragalus Root and Ashwagandha.

“When Nina was diagnosed with Osteosarcoma, I researched the best medicinal mushrooms to help Nina’s body fight the cancer and put them in a bottle with other adaptogenic herbs that make this tincture even more powerful! Combined with cannabis medicine, we’ve been able to keep Nina’s cancer controlled and she is thriving TWO YEARS later.” – Angie

She’s already breaking records, and I’ve made sure to share her journey with pet parents everywhere.

Note: Like all discount codes, they don’t last furever! Angela Ardolino is a holistic pet expert who has been caring for animals for over 20 years. Angela owns and operates Fire Flake Farm, her animal rescue farm, as well as two locations of a natural pet salon and shop, Beautify the Beast. She’s also the founder of CBD Dog Health, which offers high quality, all-natural cannabis health and wellness products. As well as the founder of MycoDog, and Your Natural Dog where she hand-picks natural products alongside trusted vets for dog owners like you.

To see Angela on her rescue farm today, surrounded by animals, is to truly see her in her element. Looking at this furry, joyful family you would never suspect that Angela and her pets were once full of aches, pains and anxiety. Angela is the mother to Odie (15-year-old mini-schnauzer), Nina (10-year-old Doberman), Jolene (9-year-old mutt), Maza (9-year-old mutt), Rhemi (10-year-old poodle), multiple ducks, roosters, chickens and geese, plus pigs Ellie and Penelope, Brenda the one-legged pigeon, and the many dogs that she fosters from time-to-time at Fire Flake Farm. Jason Scott is a Mycologist, Ethnobotanist and Spagyricist who has studied traditional Hermetic Alchemy, from history and philosophy to practice, for the past decade. He has a background in Ethnobotany and Plant Medicine that started on the Big Island of Hawaii, and has carried back with him into his home: the Pacific Northwest. Born and raised in Oregon, Jason has an intrinsic interest in the Fungal Queendom and all of its aspects: from cultivation and mycoremediation, to historical and cultural relationships. Jason has studied various different healing modalities including Ayurveda in Nepal and Western Herbalism all over Oregon and Washington. He is on an ever-deepening journey of education to understand the practical applications of his interests, and the golden threads that connect them.

Jason has been published on the topic of AlcheMycology, exploring fungi through traditional Alchemy in Radical Mycology by Peter McCoy and Verdant Gnosis Volume 3, compiled by Jenn Zahrt, Catamara Rosarium, and Marcus McCoy. He has taught through these topics all over the United States. He is the Founder and Owner of Feral Fungi where he produces Mushroom Spagyric Tinctures, and curator of AlcheMycology.com where he shares some of his teachings and writings alongside other fascinating discoveries in the world of Fungi. Jason is also a co-organizer of the Radical Mycology Convergence and the Fungi Film Fest.