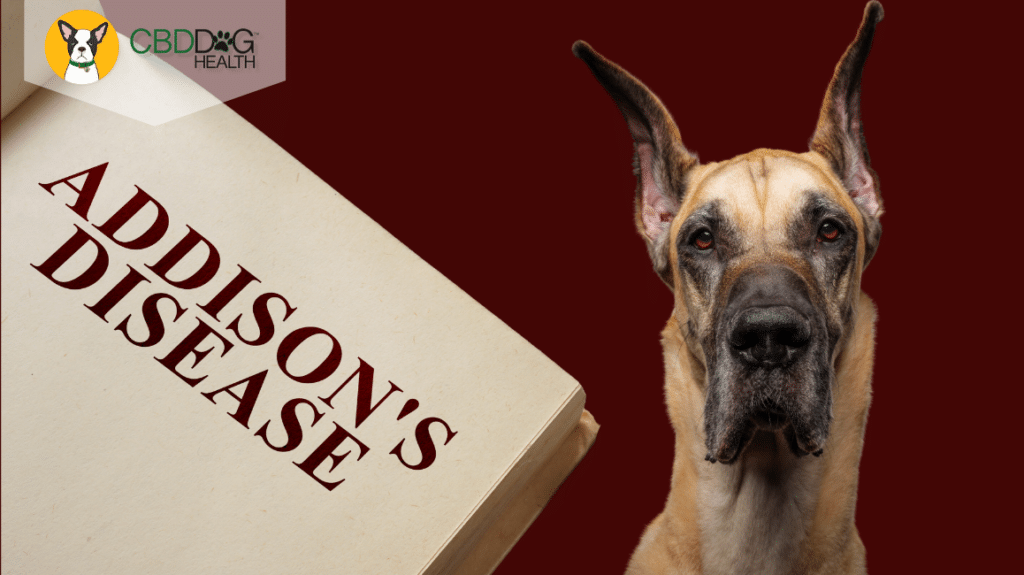 Addison’s disease, scientifically known as hypoadrenocorticism, is a serious condition that (with proper treatment) can be managed once diagnosed. Fortunately, dogs who have been diagnosed with Addison’s can continue to lead relatively normal lives when the condition is addressed properly.

Addison’s disease begins when the adrenal glands no longer produce the hormones necessary to balance the body. The most important hormones produced by the adrenal glands are naturally occurring steroids; most particularly, cortisol and aldosterone. Without these hormones, the dog’s body will deteriorate quickly and symptoms will begin to appear. Once symptoms arise, that’s when the diagnosis can be made to move them on their way to recovery.

Unfortunately, senior dogs may go undiagnosed longer than younger dogs due to the symptoms of aging being similar to those of Addison’s. We’ll discuss this further momentarily.

Unfortunately, the cause of Addison’s is not well-established. Most commonly, Addison’s is caused by some type of immune-mediated response causing destruction to the adrenal tissue. The less common cause is due to trauma and/or injury. Addison’s may also occur following diagnosis of another endocrine disorder known as Cushing’s.

The other form of Addison’s may be caused by a tumor or some type of pituitary defect. This may occur when a dog has been treated with steroids long-term or has abruptly stopped taking any medication.

Any dog can develop Addison’s disease, although it is most common in the following breeds:

Symptoms may come and go in the beginning resulting in a bit of confusion as to what may be causing them. You may notice mild forms of anxiety, lethargy, lack of appetite, and/or weight loss in the beginning stages of Addison’s.

As the condition progresses, the symptoms will begin to worsen. The first naturally-occurring steroid, aldosterone, is responsible for potassium, chloride, and sodium levels in the body. With the lack of this particular steroid, there may be issues with the kidneys, heart, and circulatory system.

Cortisol is the major steroid that causes concern as it plays a major role in almost every bodily function. Cortisol is responsible for maintaining glucose levels, regulating the body’s metabolism, breaking down proteins and fats, regulating blood pressure, forming red blood cells, and counteracting stress in the body.

With both combined, the following symptoms may be present:

If Addison’s is suspected, veterinarians will likely recommend a diagnostic test known as an ACTH stimulation test. The test introduces a synthetic hormone to determine how the adrenal glands will respond.

Unfortunately, Addison’s disease is almost always diagnosed once it reaches an acute stage known as an Addisonian crisis. In an Addisonian crisis, a dog may display severe vomiting and diarrhea and/or collapse. It’s important to get your dog to a veterinarian the moment this occurs for stabilization.

Once the dog has stabilized, blood work will search for anemia and high levels of blood potassium. Sodium, chloride, and calcium levels in the blood will also be examined.

Addison’s disease is a complicated condition as many of the symptoms are consistent with aging. It’s quite easy to confuse the aging process with this ailment. Aging pets are known to lack in appetite on occasion, be sleepy more often, fluctuate in weight, and experience pain and inflammation; many of the symptoms associated with Addison’s.

Routine checkups are a must. If you suspect any differences within your dog during her 6-month or annual visit, it’s important to let your veterinarian know.

Low-fat diets are not recommended for pets with any type of endocrine disease whether it be Addison’s, Thyroid, or Cushing’s Disease. Fat cells are actually considered to be an endocrine organ because they do produce hormones, like Leptin, which regulates all the other hormones within the body. In traditional pet foods, whether grain-containing or “grain-free,” the endocrine system can be negatively affected due to high carbohydrate levels and lack of appropriate fats.

Good bacteria in a pet food is also critical to the prevention and/or maintenance of endocrine disorders whereas bad bacteria can contribute to the negative effects on the body. Fermented foods from a trusted source provide good bacteria to override the bad.

Foods containing natural sources of vitamins and minerals are also encouraged as opposed to providing extra supplementation in addition to a regular diet. Whole food nutrition is critical for a well-rounded, healthy pet.

Proper nutrition with endocrine conditions is critical to prevention and/or improvement. Pet Foods which are low in carbohydrates, and containing the correct amount of saturated fats and naturally-occuring Vitamin D nutrients pets require. In addition, good bacteria is provided to the pet which is one of the main ingredients missing from the majority of pet foods today.

CBD as an Option

CBD has been questioned as an option for patients with Addison’s disease. It comes as no surprise as Addison’s is classified as an autoimmune condition, but additional research must be conducted to further determine the effects of CBD on autoimmune diseases.

In a study published by Biochemical Pharmacology, the impact of CBD on immune function was examined. Scientifically, the study stated “CBD does exhibit immunosuppressive properties. In particular, CBD decreased IL-8 and the chemokines MIP-1α and MIP-1β from a human B cell line.” In other words, the results indicated that CBD suppressed immune function making it potentially viable as an alternative for patients with autoimmune conditions.

Routine visits to the veterinarian are critical for many reasons; one of which being to determine if your dog’s body has been functioning properly and if you have noticed any differences in behavior, eating habits, weight gain or loss, and routine blood work when necessary. Fortunately, Addison’s disease can be managed with proper treatment, diet, and observation.