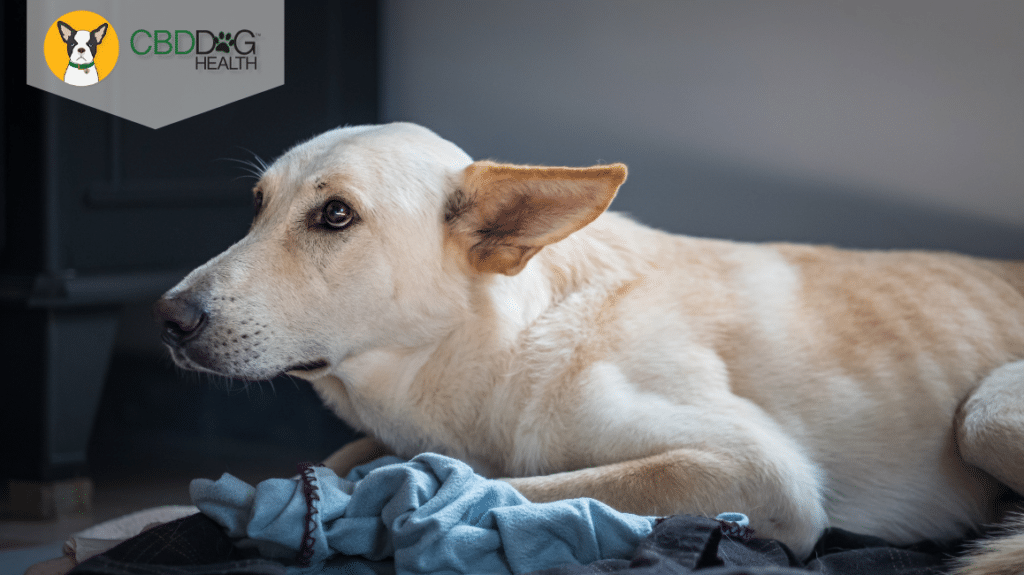 PTSD is a relatively recent phenomenon found in dogs. Scientists were not aware dogs could experience symptoms of PTSD and many veterinarians remain hesitant to diagnose dog PTSD due to the lack of research and information available currently. There is also a misconception that only people can experience PTSD. But, that doesn’t make much sense, does it? Dogs have negative experiences just as we do. There are dogs who are believed to have PTSD due to past experiences like dogs who have served in the military or in the police force.So how can we help PTSD in dogs?

Signs of PTSD in Dogs

PTSD, or post-traumatic stress disorder, is a debilitating, chronic anxiety disorder following any sort of traumatic event. According to Janice Huntingford, DVM, “The symptoms of PTSD in dogs are similar to those seen in separation anxiety or other forms of canine anxiety disorders. Elimination, vocalization and destruction are the most commonly reported signs of separation anxiety and of PTSD. Sudden, intense responses to thunderstorms or other noises may manifest as extreme escape behavior in these dogs.”

The clearest evidence of PTSD can be found by studying military dogs. In 2010, there were dogs sent home from war with symptoms that would resemble PTSD. In 2012, dogs were found to be experiencing symptoms including irritability, depression, and avoidance of people, places, and certain objects. The dogs who were experiencing these symptoms had not displayed any type of PTSD-related signs prior to deployment. Dogs who have experienced symptoms of PTSD have often been sent home due to their refusal to complete the job at hand; the jobs they were trained to do.

According to Dr. Sara Rose Knox, a Veterinarian in the military, “most people know that post-traumatic stress disorder can afflict service men and women, but it can also be apparent in military dogs. As dogs are becoming more and more involved in our war fighting experience—whether they are patrol dogs, working dogs or bomb dogs—they experience the same things we do and they get nervous as well. She continued to state “It’s a new area we are studying. We’ve dedicated a lot of time and education on it. We get constant reminders of what to look for, how to start preliminary treatment and then where to send them if [they need help]. These dogs are considered just like military members, and they get the same care that we do.”

Luckily, there has been some research conducted circling around how the endocannabinoid system, or ECS, can help when it comes to PTSD.

In a study published by the British Journal of Pharmacology, preclinical studies found CBD reduces fear in mice by facilitating the extinction of memories. According to this recent research, CBD was found to disrupt negative memories up to one hour following a fear stimulus. This study found anandamide, CB1, and CB2 receptors responsive during this process.

Despite a lack of research in PTSD, and dog PTSD in particular, there has been a significant amount of research in relation to CBD and anxiety that could prove helpful. An article in Neuropharmacology stated, “in addition to modulating basal anxiety states, recent studies suggest an important role for the endocannabinoid (eCB) and glucocorticoid systems in the modulation of emotional states and extinction of aversive memories in animals.” This leads us to believe CBD can aid in the elimination of aversive memories to treat severe anxiety disorders like PTSD.

Related: CBD for Anxiety in Dogs 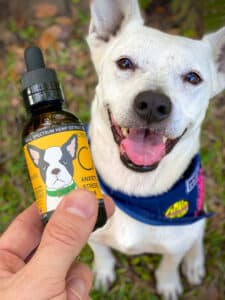 The cannabinoids within the tincture bind to the CB1 receptor, as discussed above, mimicking a ‘happy compound’ known as serotonin by binding and activating the body’s serotonin receptors. Serotonin receptors (along with serotonin) are responsible for emotional balance and well-being resulting in a potential therapeutic effect for dogs experiencing PTSD.

One dose of our CALM CBD oil for dogs contains approximately 9mg of CBD. This is our standard recommended dosage for anxiety in dogs, however every dog is different and may need more or less CBD for optimal results. We always recommend starting low and slowly increasing the dosage until you find their optimal CBD dosage for dog fear and anxiety.

Further research is necessary regarding PTSD in dogs, so we are able to better understand and support our beloved pets. While we are waiting for research to catch up, we can use what we know. We know CBD has been shown to help with anxiety and fear based emotions, as well as negative memories, which may benefit dogs with PTSD. With the proper support and supplements, like calming CBD oil for dogs, we can help our dogs live their best life.